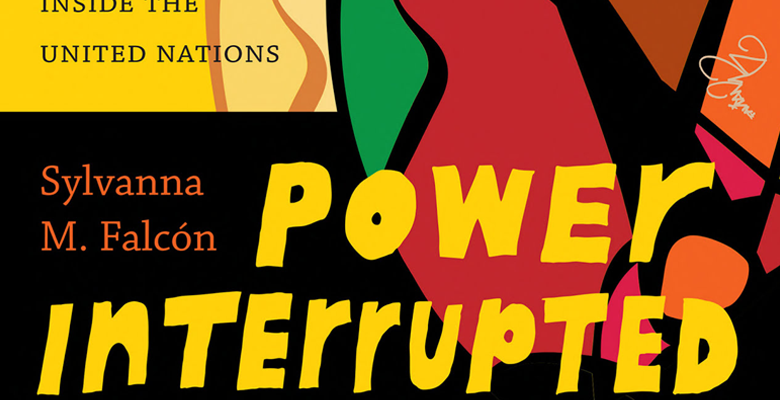 Sylvanna Falcón: On the professional level, I am an Associate Professor of Latin American and Latino Studies at the University of California, Santa Cruz (UCSC).  I joined the LALS faculty in 2010. My research and teaching interests are in human rights activism, transnational feminism, racism and antiracism, and transitional justice in Peru. I am the author of the award-winning book Power Interrupted: Antiracist and Feminist Activists inside the United Nations, [University of Washington Press, 2016 – awarded the National Women’s Studies Association Gloria E. Anzaldúa Book Award] and the co-editor of New Directions in Feminism and Human Rights [Routledge, 2011]. I am a former United Nations (UN) co-consultant to the UN Special Rapporteur on Violence Against Women. In January 2017, I started to produce and host a weekly public affairs radio program called Voces Críticas/ Critical Voices on KZSC 88.1FM (UCSC’s radio station). This radio show offers an informed discussion of the news and social issues facing and of interest to communities of color. I am also the incoming director of UCSC’s Chicano Latino Research Center (7/1/18).

On a personal level, my parents are immigrants from Peru. They migrated during the throes of resistance to US segregation in the 1960s. I have had a very supportive and loving partner for the past twenty years and a beautiful daughter who seems to always be open to travel adventures to explore the world with me.

Sylvanna Falcón: First, my book addresses how the United Nations (UN) as an institution is fraught and messy but that does not necessarily mean it should be discarded for the purposes of activism. The UN is a mega institution and deciphering the points of entry that exist can assist social movements. But that is not to say activists can only have small victories there. We just have to look to the institution’s history to know that isn’t the case. For instance, thanks to the work of two Latin American feminists in 1945 (Bertha Lutz of Brazil and Minerva Bernardino of the Dominican Republic), there is a gender equity clause in the UN Charter. I would consider that a fairly significant win. And through learning about them, I also wrote about how feminist dissent has been happening since day 1 of the UN’s founding.

Second, my book and subsequent scholarship also discusses the difficult quandary facing US people of color who engage in transnational advocacy because we come to symbolize US power. We have to be humble and self-reflexive enough to grapple with the breadth of depth of US power and not suddenly assert that the confluence of racism and sexism we experience in the US makes us exempt. As one interviewee said, “Even though you are a person of color and you identify as a person of color who is racially oppressed, you are an American, and that means something when you are going outside of the country. And that means something about the way people perceive you, and that means something about how you behave in being real conscious about the national privilege you have as an American citizen (p. 137-138).

Sylvanna Falcón: As a young adult after college, I was experiencing and learning a lot about grassroots activist work in San Francisco from women of color. This introduction into and education about human rights led me to appreciate the difficult work of lobbying, of reaching compromise, and sometimes making difficult advocacy choices while maintaining one’s integrity. And so I became motivated in understanding the challenges facing many advocates who lobby at this global level.  Being surrounded by activists all around the world is really nothing short of inspiring. Staying motivated to do research can be easy when inspired and you believe in the purpose of the project. Now that is not to say doing research is easy as many of us know how arduous it can be.  But when we make these incredible discoveries as part of the research process, it can be the motivation you need to keep going.

Sylvanna Falcón: I think the activist project that is embedded within Latinx Talk is likely the most applicable here.  If your readers are interested in activism that engages the local but connects to the international, then this book reflects that type of organizing.  I hope readers gain an appreciation for how painstaking the process can be to shift discourse at the UN, to lobby there, especially when the subject is focused on race and racism intersecting with gender and patriarchy.

Latinx Talk: We have recently published on Afro-Latinx feminisms, Latinx in the Midwest, and current attacks on Latinx communities. What does your work tell us about one or all of these topics?

Sylvanna Falcón: My work contributes to an understanding of Latinx and other women of color feminisms that underscores we should resist succumbing to a linear progress narrative.  In other words, just because we came together and had some success in advancing an intersectionality paradigm at the UN level, there are real tensions that remain, including among feminists because of geopolitical power, privilege, and so forth. The term “Latinx feminisms” and “women of color feminisms” can sometimes obscure those dynamics but we need to recognize too many oppressed communities do not genuinely know one another’s histories, struggles, or issues. And some of that lack of connection is due to institutional, socio-political, and geo-political barriers. I think my activist scholarship tells us we have serious antiracist feminist work to do, especially as the Trump regime sees all of our communities as a threat.