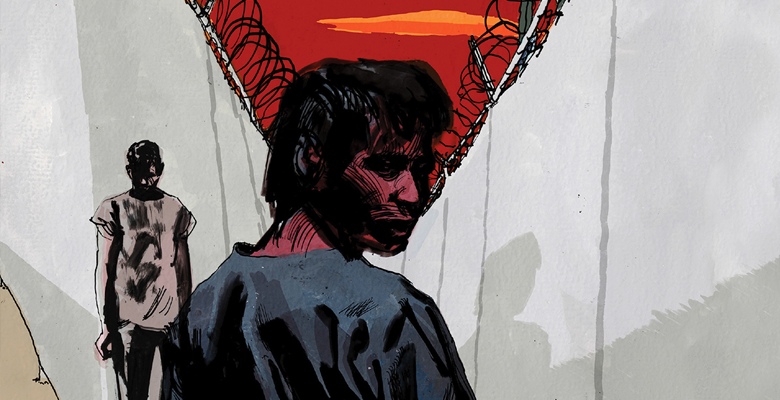 A. Naomi Paik: I’m currently a teacher and scholar of comparative and intersectional ethnic studies, U.S. imperialism, carceral spaces, and labor, race, and migration. I’ve written articles and a book that I hope readers and students find useful. I’m co-editing a few special issues of Radical History Review that I’m excited about—on “Militarism and Capitalism,” “Radical Histories of Sanctuary,” and “Policing, Justice, and the Radical Imagination.” My next individual projects focus on sanctuary and on military outsourcing.

I was born and raised in Lubbock, Texas, spent about the next fifteen years in New York City, had a brief stint in Austin, and now live in Chicago. I love everything about food, cooking, and beverages, especially bringing people together through them. I’m fiercely devoted to the people I care about, so it’s advisable not to mess with them. I feel my feelings deeply, which I’m grateful for, but which can also be a bit exhausting. I have a low tolerance for nonsense, which I get from my mother. I’m the daughter of immigrants; I keep discovering the influence of this fact on my life more and more over time. My astrological sign is Cancer. My element is wood (I’ve been told). A lot of times I have a hard time making sense of the world. I like the work I do because I constantly get to learn and be challenged by students and other interlocutors.

A. Naomi Paik: First, a quick summary… The book, Rightlessness: Testimony and Redress in U.S. Prison Camps since WWII, examines how the U.S. state has continuously created rightless subjects by imprisoning them in camps, even as it has proclaimed itself the world leader of rights domestically and globally. It analyzes this key paradox of U.S. state power by focusing on three camps and the testimonies of their detainees: Japanese American internees who fought for and received redress in the late 1980s, HIV-positive Haitian refugees detained at Guantanamo in the early 1990s, and so-called enemy combatants imprisoned at Guantanamo under the war on terror.

I hope readers find the concept of rightlessness and the method of reading testimony useful for their work. In the book, I define rightlessness as the removal from the social and political community that could guarantee their “right to have rights,” as Hannah Arendt noted. Put differently, this community provides the pre-condition for rights to have meaning at all. So, when the U.S. removes certain people from the rest of us by imprisoning them in camps, it renders those people rightless. But what fundamentally defines rightlessness is, in John Beverley’s words, “not mattering, not being worth listening to.” So, my method of closely reading the testimony of these people who don’t matter to us is essential to the argument and to the political commitments of the book. In disregarding their disregard, the book’s attention to these testimonies seeks to shed light not only on the ways we are implicated in the terrible fates of the rightless, but also on how their predicament heralds our collective future unless we do something about it.

A. Naomi Paik: None of this made sense at the time, but reflecting back, I think living in New York City in the years leading up to and following 9/11 pushed me toward the research that ultimately became Rightlessness. That day was bewildering and horrifying. But there was never space to feel the full weight of what happened before it was mobilized for even more violence and death. Our grief was deployed like a weapon to wage war that is still ongoing and that covers the whole globe as its target. And it’s been used to imprison men indefinitely in the Guantanamo camp. When the camp opened—with those now iconic images of men dressed in hoods, blacked out goggles, headphones, and orange suits kneeling in the ground while harassed by dogs and military—I remember feeling, like a lot of people, enraged at how my government was imprisoning and torturing these men in my name. As a student of ethnic studies, I knew then that this kind of racialized mass imprisonment was not new. We had done this before. But I still didn’t understand what was happening.

So, I think my research was propelled by wanting to understand what specific historical and legal trajectories made the Guantanamo camp possible. In general, I knew these trajectories were rooted in the racism that is foundational to the United States, and in the imperialism behind the U.S. occupation of Guantanamo Bay and its ability to wage a global war on terror. Such general frameworks are a useful place to begin, but the research drew me into the particular histories and legal precedents that would help us understand, specifically, how we got to this enduring predicament.

A. Naomi Paik: I hope that Latinx Talk readers would find most of the book useful!

In terms of the subject matter, I think your readers would see resonant themes in the book’s focus on U.S. imperialism in the Caribbean, on issues of migration, and on the ways that certain populations (almost always people racialized as nonwhite) become targeted by the state for removal, whether through imprisonment or other means, like deportation and exclusion. I think that rightlessness offers a capacious concept that can help us understand predicaments that aren’t defined strictly by incarceration or by U.S. state violence. I hope that its expansive interpretive framework might also model ways to connect different people subjected to violence and privation, while encouraging us to think through the specific conditions that allow forms of rightlessness to adapt and persist across time and space.

I also hope that the book can offer a way to think through the limits of our strategies for resisting state violence. As I argue, rights cannot solve the problem of rightlessness. The rightful enjoy rights protections only because other, rightless subjects are so devalued that they are excluded from those same protections. We can see this in the fact that our government wages endless war and incarcerates more than 2 million people in the name of protecting the security and ability to live a good life for the rest of “us.” What this means is that we cannot expect liberal rights or institutions, like the courts, to resolve the problems of rightlessness. They might be able to achieve important goals, like the release of certain imprisoned or tortured people, but they cannot undo the structures of exclusion that form the very basis of rights to begin with. I also hope that the book can help us see that listening to the testimony of rightless and taking them seriously is not about charity. It is about our shared future. The rightless see where we are all heading if we don’t defend each other. Relatively rightful people, like me, have to use our power and privilege to amplify the voices of those who don’t matter and aren’t seen as worth listening to.

Latinx Talk: We have recently published on the presidential pardon of Arpaio and the divisive scapegoating of Latina/o immigrants. How does your book relate to these topics?

A. Naomi Paik: I think Arpaio has made the connections to the book’s arguments clear for me. He ran an outdoor prison in the Arizona desert and referred to it proudly as a concentration camp. The whole point of this severe imprisonment was to send undocumented people and immigrants, always racialized and racially profiled in Arizona as brown Latinx, that they should not come to the U.S. unless they were willing to face these powers of state violence. This should sound familiar to the histories recounted in my book—of “internment” camps located in U.S. deserts, of Haitian refugees imprisoned as “illegal aliens,” and of “enemy combatants” spectacularly displayed when the Guantanamo camp opened as a warning to people racialized as terrorists. Further, the use of detention as immigration deterrence can be traced to the history of our exclusion of Haitian migrants and refugees.

And while there are distinctions between the camps I examine and the one Arpaio ran, I also insist that a spectrum ranges between the rightful and the rightless, with the tactics of power exercised in the camp marking only steroidal versions of ordinary legal and disciplinary practices used throughout the U.S. We can see this spectrum in our treatment of prisoners in the criminal justice and immigrant detention systems, where denials of supposedly inalienable rights happen all the time.

45’s pardoning of Arpaio shows that we cannot rely on liberal institutions to restrain the powers of the state to create rightlessness. Even though a federal judge convicted him of criminal contempt for continuing to detain undocumented people against court orders, there really is no consequence to Arpaio’s actions. As advocates both for and against immigrants have noted, the pardon conveys the message that the due process rights of immigrants are not worth observing. ICE, CBP, and other law enforcement agencies need not worry about pesky rights.

I want to end a more hopeful note, especially since I believe that left pessimism is an ethical and political nonstarter. We have incredible challenges facing us—from catastrophic environmental destruction to endless war to rising fascism. But we are also seeing more people coming together to turn this tide. I just hope by the time we all realize that rightlessness is not confined to “those people over there,” but can spread to ensnare all of us, it won’t be too late.