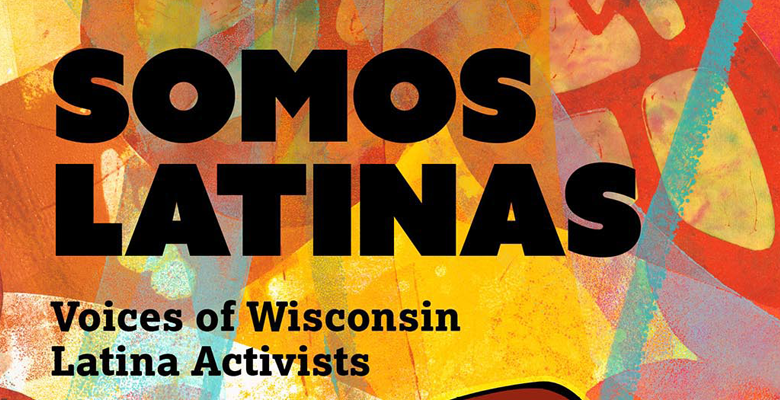 Latinx Talk: Tell us about yourselves.

Eloisa Gómez: I am second-generation Chicana from Milwaukee, WI. I have been active in the Latinx community since the late 1970s. I received my B.A. in history from Mt. Mary University and an M.S. in Urban Studies from the University of Wisconsin-Milwaukee. In 1981-82, I served on the Board of Women of Color News, a publication that focused on the empowerment of women of color. In 1982, I participated in the Community Historians in Residence Program in association with the WI Historical Society for which I conducted oral history interviews of Milwaukee’s early Mexican and Mexican-American residents in Milwaukee. I received a WI Humanities Grant for “Latinas en Wisconsin,” a photo essay of Latinas in Wisconsin in 1983 to showcase our diversity as Latinas. My academic partner for the project was Alverno College. In the 1980’s, I helped found and was active in the Latina Task Force and the WI Council on Hispanics in Higher Education (WHCHE); both focused on empowerment strategies for Latinas and Latinx students and staff in higher education, respectively. Since then I have served on various local, state, and national advisory and nonprofit boards, including the Latino Historical Society of WI (2011-15) and the Somos Latinas Advisory Committee (2012—17). I currently chair the Latinx Voter Ed & Outreach Team of the League of Women Voters of Milwaukee County. I am retiring as an administrator for University of WI-Extension in July, and I have begun to write poetry in recent times.

Andrea-Teresa Arenas: I have spent the majority of my life engaged in post-secondary education policy formation, college instruction, and Latinx/people of color advocacy. As a first generation college graduate, I have worked to support other first geners to become faculty.

Latinx Talk: Most books offer us complex considerations of multiple issues, but we’d like to ask you to talk to us about one or two key contributions that your book makes to knowledge about Latinx experience and history. Also, what parts of your book would be of most interest to the varied readers of Latinx Talk?

Andrea-Teresa Arenas: The book combines powerful biographic narratives of lives of challenge and success in activism. The theme analysis is of value given they provide evidence of positive risk taking which is counter to the existing academic literature. For me, this is THE most important finding of the book. Currently risk taking in usually measured in corporate structures not non-profits and benchmarks used to assess risking taking favor males. This research breaks the mold on Latina positive risk taking on behalf of others.

Eloisa Gómez: We know that researchers of local and national history have neglected to include the contributions of Latinas overall, to the extent that we need to say that we are illiterate when it comes to Latinas as change agents. The book, Somos Latinas, examines the contributions of largely 25 older Wisconsin Latina activists whose community building efforts are told by each of them from a series of oral history interviews. The book begins to bring to light their contributions in various parts of Wisconsin between the period of the 1960s-current times; It shares their challenges, influences, motivations, and aspirations. The book highlights that community activism is not monolithic, a la Saul Alinksy style, but that Latinas use a variety of strategies, based more on collaboration than power dynamics to create change.

Eloisa Gómez: My co-author and I agreed that to further elevate the Somos Latinas History Project of Wisconsin (the oral history collection and archives), housed at the WI Historical Society, that a book, based on some of the women’s stories could create greater awareness of the collection; that was the purpose of the book. The fact that we had a publisher, the WI Historical Society Press, interested in our book proposal was sufficient fuel to edit  a subset of these stories. We have begun to see this goal realized with the recent publication of our book. I had not anticipated that by merging their stories in a standardized, succinct way that it would expand and deepen my sense of the collective experiences of older Latinas in their struggle for justice.

Andrea-Teresa Arenas: First the book is a natural off-shoot of the Somos Latinas History Project which I direct and which was created by Chicanx Studies students from 2012 to 2015. Once the 40 plus documentaries were completed Eloisa and I decided we needed to dig deeper by not only documenting their lives but also research key themes in which academic literature is nearly non-existent.

Latinx Talk: At Latinx Talk we are working to develop new approaches to sharing scholarship, collaboration in generating and editing scholarship, broadening audiences, empowering voices that are underrepresented in academia, and working with all parts of our varied communities. What parts of this project might your book most be in conversation with? What can our readers gain from your book?

Andrea-Teresa Arenas: The book includes details on the structure, processes, training, and more which prepared Chicanx Latinx Studies students to engage in community based research, produce video documentaries, edit, select personal archives, and conduct the interviews. The entire Phase 1 (video) are the result of undergrads with the goal of promoting qualitative appreciative inquiry and graduate school preparation.

Eloisa Gómez: What is community activism from a Latinas’ perspectives, experiences? How different or similar is it from community activism overall, or historical? This needs further exploration and dialog at grassroots, policy, and academic levels. How can we better understand it and how do we utilize it to create further change for the increased empowerment of each girl, woman, her family and community. To the academics out there, I’d like to share that in attempting to access research on the themes explored in the book, I discovered that much academic research on Latinas is also hidden, largely gated by an online subscription fee. I hope Latinx Talk engages in dialog on how academic research can be less restrictive to community researchers.

Latinx Talk: We have recently published on the divisive scapegoating of Latinx immigrants in the U.S. and on efforts in Midwest educational systems to ensure the success of Latinx students. How does your book relate to these topics?

Eloisa Gómez: Some of our women in the book are immigrant women. They share the struggles of coming to the U.S. and to Wisconsin, including their treatment by the communities they arrived in and the institutions they needed to interface with for services. I hope readers better understand these experiences—the struggles to maintain their culture for their families, the ongoing process of revisiting their own identities as they acculturated into a new society. Their reflections in the book show a deep desire to make Wisconsin a better place through their efforts by adding what they have, not subtracting from themselves to fit in. Overall, I believe the stories will further humanize immigrants if the reader has stereotypical notions of immigrants.

Andrea-Teresa Arenas: The live of immigrant women in Somos Latinas documents the positive and important social and political changes they created in Wisconsin and the world. Many of them focused on education either in K12 and/or post secondary education. The majority of Somos women have some form of post-secondary education from tech courses to doctorate degrees which can lead to additional research on the impact of activism on educational trajectory.

Eloisa Gómez can be reached at: 2somoslatinas@gmail.com