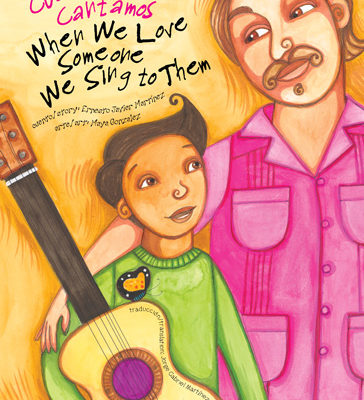 Ernesto Javier Martínez: I am a tenured faculty member in the Department of Ethnic Studies at the University of Oregon (UO). My work—both academic and artistic—explores how racially and sexually marginalized communities in the United States use literature, art, and music to produce knowledge about their lives despite being subjected to forms of violence that distort their reality and that challenge their credibility as knowers. I am the author of On Making Sense: Queer Race Narratives of Intelligibility (Stanford UP, 2012), as well as the co-editor of Gay Latino Studies: A Critical Reader (Duke UP, 2011) and The Truly Diverse Faculty: New Dialogues in American Higher Education (Palgrave, 2014). Most recently, I am the writer of the children’s book When We Love Someone, We Sing to Them/ Cuando Amamos Cantamos, illustrated by Maya Christina Gonzalez (Reflection Press, 2018), as well as the writer and co-producer of the short film La Serenata, directed by Adelina Anthony.

Speaking more personally, I’m originally from Oakland, California. I’m Mexican and Puerto Rican, and I share a home with a cat named Ocho.

Ernesto Javier Martínez: My children’s book is a queer reclamation of the Mexican serenata tradition, the tradition of demonstrating romantic affection proudly, publicly, and through song. In the book, I tell the story of a boy who learns from his musician father about the importance of this tradition. One day, however, the boy asks his father if there is a song for a boy who loves a boy. The father, surprised by the question and unsure of how to answer, must decide how to honor his son and how to reimagine a beloved tradition.

While Latinxs are often represented in literature and film as valuing family and tradition, too often these representations suggest that Latinx family values are antithetical to embracing and respecting LGBTQ kin. My children’s book portrays a father eager to transmit cultural traditions, but courageous enough to also re-imagine them. In this way, my book provides families with an opportunity to reflect on beloved cultural practices in ways that heal historical trauma and that work to expand traditions to include everyone.

Latinx Talk: What motivated you do to this kind of work?

Ernesto Javier Martínez: I grew up singing in my father’s family trio. We sang huapangos, boleros, and rancheras at weddings, birthdays, cultural events, and funerals. From a very early age, I learned the important role music played for immigrants living in a foreign land. Unfortunately, none of the songs that I was taught reflected my experiences as a queer boy, and many of the events where I was asked to sing made me feel self-conscious about my feminine body comportment and sensibilities. As I became more aware of my sexuality, it was harder for me to sing with authenticity and joy. At a certain point, I even stopped singing.

Working closely with the award-winning artist, educator, and children’s book author Maya Gonzalez, I used holistic writing practices as a form of personal healing and, in the process, I produced a children’s book that, although arising from a deep hurt in my life, transformed that emotional pain into an empowering story for my community.

Latinx Talk:  What aspect of the Latinx Talk project does your book most align with? What can our readers gain from your book?

Ernesto Javier Martínez: My children’s book speaks directly to Latinx Talk’s collaborative and interdisciplinary spirit, particularly the desire among scholar-activists to write in ways that can be understood by those outside of academe.

I feel moved to add that my book is a direct response to the profound underrepresentation of Latinxs in the literature produced for youth. For example, Latinxs constitute roughly 18% of the US population. However, only 3% of children’s books reflect Latinx communities. Compare this to Whites who constitute 61% of the US population, but are over-represented in the literature written for children at 89% of books. The significance of this lack of representation is compounded by demographic studies projecting that Latinx youth will constitute 30-40% of all youth in the United States between the year 2050 and 2060. This demographic shift represents serious challenges for educators seeking to teach culturally competent material that accurately reflects the lives of the children in their classrooms.

Latinx Talk: We have recently published on the increase of Latinx college students in the face of the underrepresentation of Latinx peoples in the college curriculum and in the faculty. How does your book relate to this topic or these topics?

Ernesto Javier Martínez: The discipline of Ethnic Studies has always understood the important relationship between cultural expression, community empowerment, and social transformation. My book speaks to the ongoing value of training underrepresented students (whatever their size in the academy) to express themselves creatively and collectively, to become active and critical consumers of cultural production (wherever they may find it), and to fully understand that they, as members of and future leaders in their communities, can (and should!) produce the literature, art, music and film that they do not see in the world.