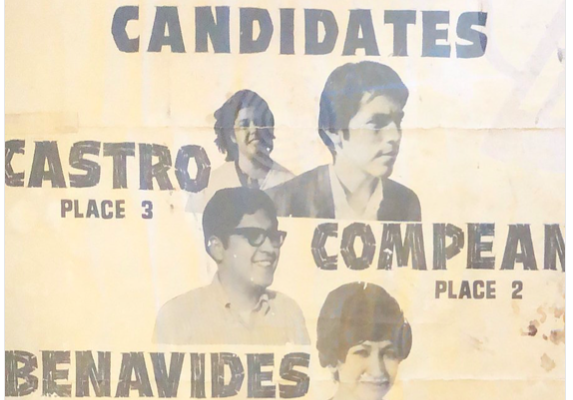 In January 2019, former San Antonio Mayor and U.S. Secretary of Housing and Urban Development, Julián Castro announced his 2020 presidential bid in his hometown of San Antonio, Texas, with his mother, Rosie Castro, at his side. Castro has often been seen alongside her twin sons, Julián and Joaquin, at civic engagement meetings across the nation. Many refer to her as the matriarch of the Castro family. And rightfully so. Her story is not merely that of a mother to two influential Latino public officials. Castro has her own story. She influenced the public service careers of her two sons and has gained acclaim for her work as an educator, Chicana/o Movement activist, civil rights leader, and supporter of reflective democracy.[i]  Julián and Joaquin have inherited a path in public service because of their mother’s influential political activism.[ii]

Fighting to reform the political process to benefit underrepresented groups such as Latinx, women, immigrants, the poor, working-class, and middle class is part of American history. In Texas, the Democratic party had dominated in the state since the late 19thcentury and well into the mid-20thcentury. The battle for political ascendancy centered between conservative Democrats and liberal Democrats. Better known as a one-party state, white male elites and a few Mexican American males controlled the party’s policy and platform. Yet, underrepresented groups with lower social and class status – Latinx and women – often had little-to-no ability to access political power when the organizational structure did not reflect nor allow for the inclusion of anyone outside the “good ol’ boys” network. However, changes occurred when La Raza Unida Party (RUP) formed in South Texas and advanced as the Democratic party’s challenger in Texas in the early 1970s.

The RUP grew into a major third party for Chicanas/os (Mexican Americans) seeking another avenue for political enfranchisement that did not include the two mainstream parties of the time. Through RUP, Chicanas/os fought for social justice issues that involved eliminating racial discrimination, labor rights, community improvement, immigrant rights, economic and social opportunities, women’s rights, cultural preservation, bilingual education, and access to decision-making positions in government. The third party allowed them to vocalize injustice, fight for inclusion within government and to challenge the meaning of representation as a way to fight complacency that tends to develop in governmental institutions. RUP disrupted the old guard for political control in Texas.[iii] Cities included Fort Worth, Houston, San Antonio, Austin, Lubbock, San Angelo, El Paso, and throughout the South and Rio Grande Valley region. RUP did win elections. In 1972, a national convention was held in El Paso, Texas, which called for the formation of RUP at a national level.[iv] The party’s base grew across the US.

A third political party such as RUP allowed Chicanas/os to work with-and-for themselves to create an entry into the political process through the ballot box. The party emerged using a grassroots strategy reliant on community labor and networks to challenge the Texas Democratic party. Many Mexican Americans who had once aligned themselves with the Democratic party, shifted to support RUP. Political third parties are important because they provide underrepresented groups with a place to vocalize their needs and issues. This was especially true for Chicanas, as they built the party’s structure and then centered themselves within it.

Women found themselves in positions that gave them the advantage to create conscious-raising groups within the party such as Mujeres por la Raza(MPLR), to recruit and train other women into civil rights activities, and promote fellow women to run for public office.[v] Women such as Martha Cotera, Evey Chapa, Irma Mireles, Rosie Castro, Alma Canales, Hilda Vallejo, Lupe González, Virginia Múzquiz, María Cardenas, María Elena Martínez, María Jimenez, and Ino Alvárez are among the many Chicanas who participated in MPLR.[vi] Women worked as precinct chairs, county chairs, and became party officers from the local to the state level. In the 1970s, Texas had the highest number of Chicanas running for public office. Castro was part of this pioneering group of women. Knowing this history matters because it allows for a richer analysis of race and gender inequality, one that shapes our understanding of representation and democracy.

As a longtime supporter of the Democratic party, Castro had been actively involved in the Young Democrats while pursuing her college degree at Our Lady of the Lake College (now Our Lady of the Lake University) in San Antonio, Texas. In breaking with the establishment, she co-founded RUP in San Antonio. In February 1971, at the age of 23, Castro filed her candidacy for San Antonio City Council Place 3, at a time when the city ran under at-large elections. She along with three other members from the Barrio Betterment Committee, William Benavides, Gloria Cabrera, and Mario Compean, set their sights for challenging San Antonio elites in government on behalf of the working people in the city through a “shoe leather” campaign.[vii] The “shoe leather” campaign that Castro and her peers endorsed led them to canvass door-to-door to houses and local businesses, establish networks, and gain limited media exposure.[viii] Despite Castro’s loss for a seat on San Antonio’s City Council, she stayed in RUP until the birth of her sons, Julián and Joaquin, in 1974. She organized events and rallies in the city. By the late 1970s, Texas party politics was in transformation: the RUP lost its status as a party, and the Democratic party took on social justice agendas with particular attention to Latinx and women constituents. Today, these two demographics are a critical base for the Democratic party.

For the most part, Castro raised her two sons as a poor, working-class, single-mother. Her friends and family helped when possible. Castro took the boys with her to political events and taught them to care for the general welfare of the people and learn the value of being an engaged citizen in society. She did this all while she pursued her education and worked for the City of San Antonio. Julián recalled his mother’s words in his recent memoir, “As a citizen, you need to participate in the democratic process. If something is wrong, you change it. Your efforts may pay off in the long run, even if you don’t get your way right now.”[ix] Castro laid the foundation for her two sons that centered on education and civic participation. To know what the Castro’s stand for in government is to learn about the history and power behind Latinas in American politics. And it is imperative to acknowledge it.

After high school, Joaquin and Julián attended Stanford University and later Harvard Law School. As adults, the Castro brothers have used their education as a tool for social change to help their community.  At Harvard, the Castro brothers organized a long-distance mentorship program that connected students from Fox Tech High School in San Antonio with Harvard Law students. The program became known as “E-PALS” (Electronic Partnership of Aspiring Law Students) and functioned through email correspondence.[x] The program allowed for high school students to gain more knowledge about the process for becoming a lawyer and to envision themselves within that profession.

By starting at the local and then moving to the state and national level, both Joaquin and Julián have risen in the ranks in the Democratic party. In working within the system, they have been able to navigate the political process to create more inclusive structures that meet the needs of the Latinx such as healthcare, employment, and educational needs, to name a few. Joaquin Castro was elected to the U.S. House of Representatives in 2013, where he continues to serve. Julián Castro served as San Antonio’s Mayor and then in President Obama’s Administration as the U.S. Secretary of Housing and Urban and Development from 2014 to 2017. Both also campaigned for former Texas Representative Beto O’Rourke in his 2018 campaign for Texas Senate. Now Julián announced a bid for the 2020 presidential election. The Castro brothers’ strength in party politics also demonstrates that voters – and not only in Texas – want Latinos as elected officials.

Joaquin and Julián are not the first Mexican American men from Texas to achieve high positions in public office, but they are unique. In 1956, Henry B. González, who was part of the old guard, was the first Latino male elected to the Texas Senate. In 1981, San Antonio elected Henry Cisneros as its first Latino mayor since 1842. Yet, what makes both Joaquin and Julián different is their link to the Chicana/o civil rights movement, an era often viewed as one without present implications. The Castro brothers were born into a civil rights movement genealogy.[xi] Joaquin and Julián are part of a political family. While mainstream media outlets have spoken about their prestigious higher education training, professional backgrounds, and political clout – their humble upbringing in San Antonio remains sidelined. Due to Rosie’s lived experiences, she charted an activist path that both men have continued to follow in one way or another. Serving the community, fighting for civil rights, and defending the underrepresented are normal actions for the Castros.

Rosie Castro’s sons are the embodiment of her passion for social justice, politics, and perseverance for empowering others to become leaders and serve the people.[xii] She has maintained an active presence in San Antonio. When I met her for an interview she granted me years ago at Barrio Barista Coffeehouse on the Westside of San Antonio, it was clear that local community residents knew of her and respected her presence. Castro served as Interim Dean of Student Affairs at Palo Alto College and has continued with civic engagement initiatives through voter registration, campaigning, and political organizations such as Latinas Represent and Texas Organizing Project (TOP). To understand the trajectory of the Castro brothers in American politics, it is critical to unravel a political legacy that they have inherited from their mother – Rosie Castro.

Author Note: I send a special note of appreciation to Rosie Castro and the anonymous reviewers for feedback on this essay. The article developed from my dissertation study titled “Representation for a Change: Women in Government and the Chicana/o Civil Rights Movement in Texas.”

[I] Rosie Castro Interview with Latinas Represent. Retrieved from https://latinasrepresent.org/get-ready/resource/qa-with-texas-political-activist-rosie-castro/

[ii] I want to add that the RUP and Chicana/o civil rights legacy goes beyond the Castro family. Many of the RUP Chicanas such as Martha Cotera and Rhea ‘Ruth’ Mojica Hammer also had children who were influenced by their parents and the civil rights movement.

[v] Dionne Espinoza, “The Partido Belongs to Those Who Will Work for It: Chicana Organizing and Leadership in the Texas Raza Unida Party, 1970-1980,” Aztlán: A Journal of Chicano Studies36, no. 1 (Spring 2011).

[xii] Vicki Ruíz, From Out of the Shadows: Mexican Women in Twentieth-Century America(Oxford: Oxford University Press, 1998), 100.