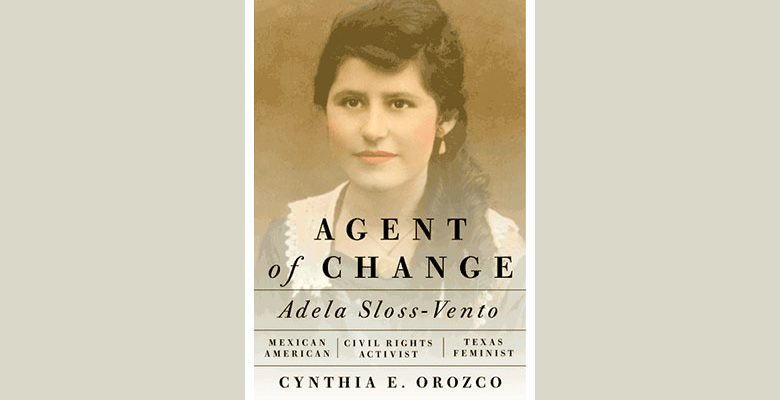 Latinx Talk: Please tell us about yourself.

Dr. Cynthia E. Orozco: My mother, Aurora E. Orozco, graduated from high school in 1938 and advocated for our education; we are six college graduates. At UT Austin I took my first Chicano history class and began research as a sophomore. Dr. Arnoldo Vento introduced me to his mother Adela-Sloss Vento when I was conducting research for my senior honors thesis. She let me use a few materials in her archive related to LULAC but did not let me see that she too was a major activist along with the men she promoted, especially the principal founder of LULAC Alonso S. Perales.

Latinx Talk: Would you please tell us about the contribution or contributions that your book makes that will be of  interest to the readers of Latinx Talk?

Dr. Cynthia E. Orozco: Agent of Change adds an unknown but significant Mexican American woman activist to our knowledge. She was a major leader in the Mexican American civil rights movement (1920-1963) and a supporter of the Chicano movement (1963-1978). Moreover, I provide a chapter on her as a public intellectual since she wrote numerous op-ed pieces and letters to the editor in Spanish and English newspapers. She wrote from 1927 to 1990. She wrote letters to the presidents of the US and Mexico about segregation, poverty, worker exploitation, and immigrant abuse as well as to state legislators and local racists. There is a chapter on her as a Democrat. We don’t have much knowledge of political women in parties before the 1970s.

Dr. Cynthia E. Orozco: I have been motivated to research Chicano and Chicana history since 1978. Sloss-Vento did not let me see her significance. Only after the Alonso S. Perales conference in 2012 did I see some of her manuscripts and letters in the Perales archive obtained by the Recovering Latino Literature project out of Houston. Then I approached her son Dr. Arnoldo Vento, retired professor of Spanish and Chicano Studies, about publishing some of her essays. He then shared her entire archive with me. We ended up writing two books on her.

Latinx Talk: What aspect of the Latinx Talk project does your book most align with?

Dr. Cynthia E. Orozco: My work aligns with Latinx Talk as my work predates Latinx Talk. I have been conducting public intellectual work in newspapers, newsletters, and other formats since 1975. Like Adela Sloss-Vento (1901-1998) and Alonso Perales (1898-1960), it is necessary to write for the general public to advance ideas and interests. Internet work allows for that and in that way, Latinx Talk is important.

Latinx Talk: Under our former name of Mujeres Talk, we published a wonderful discussion by you of documentaries about Latina/o life. How does your book relate to some of the issues you raised there?

Dr. Cynthia E. Orozco: Yes, I wrote a critique of the PBS film “Latino Americans.” We have much more knowledge of Latina activists, especially in civil rights and politics. Today, we need more filmmakers who will dig deeper or reveal the research that is now available in our writing. Sloss-Vento wrote a book about the principal founder of LULAC, Alonso S. Perales, but she was still ignored. We get tired of the male-centeredness.