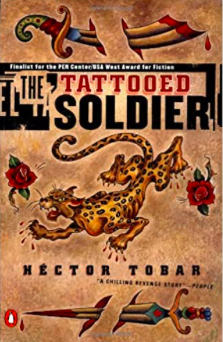 In the immigrant novel I teach, there is not one page about climbing La Bestia, paying mordidas or avoiding las maras and Border Patrol, or even one description of the US-México border. We never know how the two main characters of The Tattooed Soldier by Héctor Tobar (1998) make it to Los Angeles. The novel is about migration but refuses to give us a voyeuristic look into that particular trauma of the migrant narrative. Rather than use the arduousness of the journey to convince the reader of the characters’ status as “deserving” immigrants, Tobar gives us a war criminal and his victim.

After his family is murdered by a death squad in the mid-1980s, Antonio Bernal gets on a bus to flee the city of San Cristóbal where he and his family were already experiencing an internal exile, having fled originally from Guatemala City. We never know what happens between getting on that bus and arriving in Los Angeles. What we do know is that his family targeted by the government because his wife Elena sent a letter petitioning for better sanitation. The man who murdered Antonio’s family, Sgt. Guillermo Longoria, eventually also migrates to L.A. The story not only doesn’t tell us how Longoria got there; it doesn’t give us a clear reason why he left. We don’t know if he is “properly” documented, like the war criminal Jorge Vinicio Sosa Orantes was, or if he crossed the border without papers, like Francisco Cuxum Alvarado. Either way, Longoria is welcomed with open arms to work in El Pulgarcito Express because of his brutal military service to right-wing causes (Tobar 27). This is in stark contrast to Antonio, who, after working as a busboy and in other low-wage jobs, becomes unemployed, homeless, and undocumented.

The novel does not need to describe the traumatic migrant journey for these men because Antonio’s and Longoria’s traumas are tied to the forces that lead to their migration: US military and economic interventions in Guatemala, genocide against Indigenous communities, and the mass destruction wrought by anti-communism. The novel is set in 1992, which in Guatemala meant that the official end to the 36-year civil war (1960-96) was near. In L.A., the Rodney King Uprisings are just about to begin. The Tattooed Soldier reveals the two most dangerous national narratives: anti-communism and racism. Anti-communism—the belief that anything is better than communism, even ruthless authoritarianism—destroyed countless lives during the Cold War and is a root cause of the mass migration, exile, and displacement of up to 1.5 million people during the Guatemalan armed conflict (1960-96) (CEH 30). Racism, exemplified by the police brutality deployed against Rodney King and the genocide against Indigenous peoples in Guatemala, is shown to be a transnational force.

I teach this novel because of this transnational focus. The novel shows us that crossing the border doesn’t erase one’s past. Simultaneously, crossing the border can be a jarring moment of change. For example, Indigenous Guatemalans are seen as no different from ladino Guatemalans (Tobar 204).[1] Eerily, “todos somos guatemaltecos,” a nationalist phrase oft-deployed by Guatemalans who see Indigenous claims as divisive, becomes true in L.A. In addition, border-crossing is not only an individual act. The novel shows how the U.S. in particular, through its media and military training, impacts lives beyond its borders. The domestic policies of nations like Guatemala also have international effects, the novel argues.

Personally, as I tell my students, The Tattooed Soldier also showed me the transnationalism of silence. This was the first novel I ever read by a Guatemalan American and it brought to the fore all the things I did not know about my own mother’s migration. Despite visiting family there when we could, I knew very little about my mother’s life growing up in Guatemala. Like The Tattooed Soldier, my mom didn’t detail her journey here. As a college student, I learned that she got on a plane, thinking she was being sent to the US to visit her dad during her school break; she didn’t know that she was actually becoming an immigrant. The forces that led my abuela to put my mother on that plane is a story shrouded in silence, a silence explored in other works like Tanya Maria Barrientos’s Family Resemblance (2003) and Sylvia Sellers-García’s When the Ground Turns in Its Sleep (2007).

I teach The Tattooed Soldier, and may always teach this novel, because it starts conversations not only in the classroom, but in my students’ families. For me, it opened the door to hear stories and memories long held tight by my mother and other family members. I could never have known that within 3 years of reading The Tattooed Soldier, my mother would die. In those three years, she talked more about her childhood in Guatemala than she had in all the years before. Without Tobar’s work, I would have an even bigger hole in my soul, in my family history, in the story of my mother. Even in Texas, a place consistently imagined as only Mexican and Mexican American, I have had students of Central American descent who tell me that they understand now why their mother never talks about home, why the trauma of their parents seems to live on in them.

The Tattooed Soldier is a narrative of migration not because it’s the story of how two men made the journey from Guatemala to Los Angeles. It is a narrative about what we take with us and what we leave behind, about the forces that make us feel ni de aquí ni de allá. The Tattooed Soldier tells us that migration is not about leaving a place behind but dragging along our ghosts.

[1] “Ladino” is a fraught term with no clear definition other than to mean “not Indigenous.” Ladinos often hold to capitalist ideals and look to Indigenous traditions as remnants of a backward past. See Nelson (1999).

Guatemala: Memory of Silence. Report of the Commission for the Historical Clarification: Conclusions and Recommendations. 1999.

Nelson, Diane M. A Finger in the Wound: Body Politics in Quincentennial Guatemala. U of California Press, 1999.