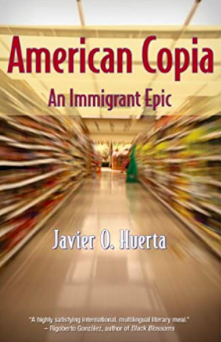 When Javier O. Huerta applied for U.S. citizenship, as part of his INS interview, he was asked to write the sentence, “Today I am going to the grocery store.” Huerta, at the time an English major at the University of Houston, describes his initial reaction: “Being in the very awkward situation of proving that I belong in a country in which I had lived already for twenty years, I was rather offended by the simplicity of the sentence.” He settles for showing the interviewer that the sentence scans as iambic pentameter, then he tells her: “One day, I will write an epic starting with that line.” Huerta kept his word. Not only does American Copia: An Immigrant Epic, published by Arte Público Press in 2012, begin with that sentence, the entire book is a genre-bending riff on the grocery store and the myriad ways it impacts our lives.

American Copia allows us a different entry into the immigrant experience by focusing on the quotidian, much of it poignant and often touching—as a child he helps his mother clip grocery coupons, translating the English and reading the fine print; he grows overweight on the processed frozen dinners he makes for himself and his little brother while his mother juggles long hours at two jobs. Through Huerta’s eyes, we quickly understand that the grocery store is a charged space, reflective of race, class, and American materialism. Huerta relates the story of a friend’s first glimpse of the U.S.: “how you climbed out of the third world into a Ralph’sSupermarket parking lot, how you and 35 other mojados rushed to the vans that were to take you to a cheap motel, how the Americans loading their groceries into their cars stared at you, how you didn’t have time to notice whether those stares rejected or welcomed you.” Huerta suggests that where you shop, what you buy, who watches you while you walk the aisles, in essence, your relationship to the grocery store reveals your position in the world.

Part poetry, prose poem, essay, memoir, and even a short play, Huerta doesn’t concern himself with literary boundaries. Nor does he feel constrained by theme. The immigrant experience underpins the book, but it is just as much a deep dive into Huerta’s literary influences, his foray into graduate school, his adventures in dating and love, as well as a catalogue of grocery store anecdotes shared by friends and family. American Copia is also very funny. Huerta revels in the play of language and slyly poking fun at himself. A running joke imagines the historians that will one day write about him (and get most everything wrong). Huerta also doesn’t shy away from the particular, including unexplained references. He’s okay with losing his readers, writing, “I am of the opinion that a joke explained is a joke misunderstood.” Or even more pointedly: “It was a joke not meant for you.” The question of audience has long been a stumbling block for Chicanx writers. Do we write for ourselves or do we write for some imagined outside audience, in which case it’s necessary to explain, teach, or translate as we tell our story? The beauty and power of Huerta’s work is that his audience is steadfastly himself. Who else can move between Spanish and English as easily as he walks the aisles of Fiesta, Piggly Wiggly, and Whole Foods, or reference Keats, T.S. Eliot, and Gertrude Stein in the same breath as the giants of Chicanx literature? Huerta gambles that he is not alone.

In spring 2019, I taught a seminar at UC Davis called Literature of the Undocumented, which I based on a course of the same name that Huerta developed at UC Berkeley in 2008 while he was still a graduate student. Most of my students came from mixed-status families; many of them were undocumented themselves. We read stories that movingly described hardships and obstacles similar to their own, and they found solace in discovering others who had found the courage to tell their story. But my students didn’t turn to these works to “learn” about the undocumented experience. They knew it all too well. As such, the stories were familiar; to a degree, expected. American Copia, on the other hand, turned their expectations upside down, and we often veered off into conversations about gentrification, gender-dynamics, or their own relationship to the grocery store.

Huerta’s stories also made them laugh, including one where he describes how he started giving alliterative titles to his dates with Alma, such as “Baked apples and Besos.” There’s a hint at a fourth date, “Pineapples and Panties,” but we don’t learn if it ever happens. One student joked that when Huerta visited our class, she would ask him about it, earning peals of laughter. That same student is undocumented and hasn’t visited her father in Mexico for almost ten years. She once shared how difficult it was to watch him grow older through a computer screen, a comment that made me choke back tears as I tried to continue discussion. In a course meant to talk about the most pressing issue in her life, Huerta allowed us to crack up at his romantic escapades and wordplay. It was a small moment, but a significant one. To view American Copia only as a narrative of migration is to miss out on its richness. Like the students in my class, American Copia is complex, layered and bold. In every way, it defies categorization, and for that reason, it must be read.