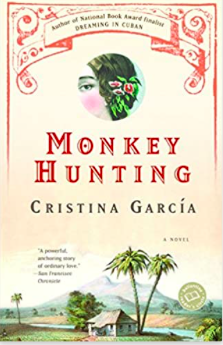 My first choice for teaching a Latinx migration literary piece is Cristina García’s Monkey Hunting (2003), a novel that accounts for what María DeGuzmán terms the “Latinasian” and Black Latinx cultures and histories in Cuba and the Americas.[1] Monkey Hunting could fit well within many types of Latinx literature courses, including Latinx Road Narratives, Transnational Latinx Literatures, and Introduction to Latinx Literature, to name a few. In my courses, I assign texts written in various literary forms and produced by ethno-racially diverse writers because I want students to recognize that Latinx identity is not defined by one Latinidad but many, as Marta Caminero-Santangelo has so thoroughly discussed (34). The narratives surrounding Latinx migration should ideally equally reflect that heterogeneity.

Within the U.S. mainstream consciousness, Mexican migrants have been the primary frames of reference for Latinx migrations, and recently, more attention has been offered to Central American migrations. Fewer people, however, are familiar with the migration histories of LatinAsian and Black Latinx people. Teaching Monkey Hunting makes an intervention in this regard. The novel focuses on Chen Pan and his spouse Lucretia’s lives (and later their descendants). The former migrated from China as an indentured servant and the latter is a formerly enslaved mulatta. Their visibility in the novel helps uncover their obscured histories. García has insisted on the importance of Cuban Chinese and African people beyond her novel, reminding listeners that these groups fought to liberate Cuba from colonial Spain (¡Cubanismo! xiii) and that Black Cubans have had immense influences on Cuban culture and dance (¡Cubanismo! xvi). She furthermore acknowledges Chinese influences on the Cuban language, noting that “There are a million expressions that tip their hat to the Chinese presence in Cuba” (“Nature of Inheritance”). In the process of establishing LatinAsian and Black Cuban people’s histories in and contributions to Cuba, García complicates people’s understanding of what it means to be Cuban or Latinx more generally, especially in her depiction of Domingo Chen, “a twenty-first-century man” with compounded ethno-racial identities who allows García to ask whether “the ways in which we discuss identity [are] still meaningful or . . . becoming obsolete? (Monkey 263).

As importantly, the text presses readers to consider the deeper historical migrations of slavery and its modern counterpart, indentured servitude, within the Americas. The migrations from China and Africa to Cuba are important to acknowledge as part of the histories of migrating Latinx subjects. They are as crucial a part of Latinx migration narratives as those occurring from Central America through Mexico and into the U.S. as well as Mexican migrations to the U.S. today. For one, Latinx migration histories necessarily include those of ethno-racially Asian and African people, not just indigenous or mestizos. Secondly, migrations from China and Africa to Cuba offer alternative paradigms that decenter the United States as the primary destination for immigrants in the Americas. Chen Pan sets for America, specifically Cuba, not to follow the “American Dream” in the U.S. but to enjoy the riches that Cuba has to offer. He is told by a man in “A Western-style suit” that he can make fast money in Cuba as well as enjoy the health benefits of Cuba’s water (Monkey 5). Chen Pan’s reasons for going to Cuba are problematic in their own way for obvious reasons related to gender and settler colonialism, but these very issues offer fodder for discussing the intersection of colonialism, slavery, and gender within the Caribbean and Americas beyond the U.S. It helps us hold the Americas more generally accountable, but this recognition also helps shift away from a historical assumption within the popular imaginary that all American migrations—from colonialism, slave passages, and migrations related to wars—are drawn toward the U.S.

Chen Pan and Lucretia’s multi-racial and ethnic descendants’ travels, in fact, complicate easy U.S. nativist assumptions about American migrations that assume Latin American migrations necessarily lead to and end with the U.S. Chen Pan and Lucretia’s son, Lorenzo Chen, returns to Shanghai where his daughter Chen Fang remains, offering in this case an American migration that excludes the U.S. altogether. Monkey Hunting does, however, include the well-known Cuban exodus in the 1960s and 1970s after the Cuban Revolution, but even that undermines any notions about the U.S.’s status as an exceptional safe haven that Latin Americans dream of visiting. This important migration within Cuban Latinx history has informed the literary works of many Cuban-American writers including Achy Obejas and Jennine Capó Crucet whose writings focus on Cuban exile and the notions of an eventual return to Cuba. Placing García’s novel within this broader production of Cuban-American exile literature helps emphasize Latinx migration narratives that, through their focus on a perennial Cuban (-American) longing to return to Cuba, help deconstruct notions of a Latin American longing for the U.S. or the assumption that all Latin American visitors wish to remain permanently in the U.S.

Moreover, though Domingo Chen travels to the U.S. as a refugee after the Cuban Revolution, he does not feel welcomed as, historically, his lighter skinned middle-class Cubans in Miami felt. As a Black-Chinese-Cuban and working-class person who, in the U.S. army “wasn’t welcomed” in the officer’s club, was snubbed by nurses despite his honorary medals, and feared being killed by friendly fire (Monkey 209), his migration narrative aligns more closely with that of the stigmatized Marielito Cuban refugees of 1980 (Robles). His immigration experience, then, complicates narratives about the U.S.’s warm embrace of Cuban refugees and exposes this nation’s class-based and racialized criminalization of Marielito Cuban refugees.

[1] DeGuzmán coined “Latinasian” to account for “What has and will continue to result from these converging processes” of migrations between Latina/o and Asian immigrants in the Americas (301). I find this term helpful additionally because it bonds Latinx and Asian identities in a way that recognizes Asian people’s integral role in forming Latin American and Latinx Identity, cultures, and histories.In The Latinos of Asia: How Filipino Americans Break the Rules of Race, Anthony Christian Ocampo thoroughly demonstrates how though Filipinos are often considered Asian American, share “historical and cultural connections with both Latinos” as well as Asian people (12; 9; 4). He reminds us that despite the tendency to classify Filipinos as Asian American and for some Filipinos to identify as such, other Filipinos believe that because of their shared colonial past and cultural similarities, including their majority Catholic society, “Filipinos should realign their pan-ethnic allegiances toward Latinos” (9).

Caminero-Santangelo, Marta. On Latinidad: U.S. Latino Literature and the Construction of Ethnicity. UP of Florida, 2009.

—.“The Nature of Inheritance.” Interview by Jessica Murphy. The Atlantic, 1 May 2003,

Ocampo, Anthony C. The Latinos of Asia: How Filipino Americans Break the Rules of Race. Stanford UP, 2016.