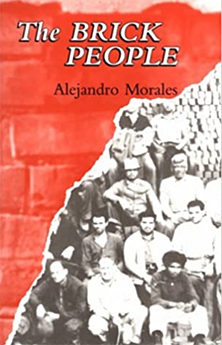 As a historical and biographical novel, The Brick People (Arte Público Press, 1988) is fundamental reading to learn of the significance of Mexican immigrants in the founding and growth of modern California, particularly of the two major cities—Los Ángeles and San Francisco at the turn of the twentieth century. In this classic novel, author Alejandro Morales used as his literary canvas the Simons Brickyard #3 in Los Ángeles—the largest brickyard in the world from the 1920s-1930s, shipping up to one million bricks each day. As the novel recounts the experience lived by the author’s predecessors who worked in the brickyard, it reaches epic dimensions by relating the legacy of Mexican immigrants as a people who forge their own destiny and contribute in the development of the city of Los Ángeles.

The Brick People is a vital text as it documents a part of Mexican immigration from the nineteenth to the twentieth centuries in California that has been disregarded. According to Monika Kaup, in “From Hacienda to Brick Factory: The Architecture of the Machine and Chicano Collective Memory in Alejandro Morales’s The Brick People,” this novel, like the U.S. technological novel, “displays, in a documentary vein, a world filled with the images of new technologies–factories, engineers, automobiles, company towns, industrial growth, urbanization, productivity” (159). Focusing on the historical reality, blended with myth and legend, The Brick People follows the development and success of the Simons Brickyard to trace the growth of California as well as the story of Mexican immigrants during the industrialization of the Southwest at the beginning of the twentieth century. The novel poses the conflictive experience of these adept workers who had the opportunity of a good job in the U.S. all the while being subject of exploitation by a paternalistic employer who replicated the long-standing Spanish America hacienda system established during the colonial period. In The Brick People, Morales fictionalizes the experiences of his own family, but also documents a historically essential community whose contributions should be known as part of U.S. history. In an interview and responding to the impact this novel has made, Morales stated:

The Brick People has also had many responses about the place and life in the Simons’ company town. Some have approached me, have sent me a letter or an e-mail saying ‘I enjoyed your book and I am so happy that you are doing this for the community’ (López López).

Hence, Morales tells his family’s story to represent, essentially, “The Brick People”—Mexican immigrant workers who tried to realize their own vision of the future, but were constricted within the confines of Simons Brickyard, physically and otherwise. The storyline reveals how the brickyard’s structure imprisons the chain of newly-arrived immigrants (including Morales’ parents) from Guanajuato, México, by making them part of the “brick machine”—a dehumanizing route to prosperity. In spite of the immigrants’ loyal labor and significant contribution to Simons (and to U.S. economy), they are subjected to mistreatment during the 1930s depression. Injustice (internal corruption, racist intimidation, etc.), along with the protagonist Octavio Revueltas’ goal of individual self-sufficiency and integration to society materialize in a house of his own, outside Simon’s property. Thus, as Kaup notes, Morales “rewrites the designing and building of modern California from an ethnic perspective,” (159) on the one hand, to acknowledge the Mexican immigrants who literally built the state with their own hands and, on the other hand, to critically examine the unjust systems Anglo industrialists have imposed on immigrant laborers, even those trying to gain autonomy.

“The Brick People” are also described as those who lived in El Pueblo de Simons, as it was known. The company town had its own post office, company store and monetary system, elementary school and town sheriff. Gradually, a brass band was formed, as well as baseball and softball teams and Fiesta beauty queens were selected to be represented in local parades and sports events. The Simons Brickyard, the largest brickyard in the world, shipped up to one million bricks each day before it closed in 1952. Although many might have never heard of it, most people in Los Ángeles, San Francisco and southern California, knowingly or not, have or will see or enter a building erected with its bricks. However, this romanticized view of El Pueblo de Simons is paralleled with a textual destabilization of history in the novel. In “Epic Linearity and Cyclical Narrative: Moving Beyond Colonizing Discourse in Alejandro Morales’ The Brick People,” Shimberlee Jirón-King confirms Morales’ recourse of lo real maravilloso as a stylistic gateway to contest the history of exclusion by the dominant culture in California, and to voice the history of marginalized peoples (27). For instance, the legend of the death of the character Doña Eulalia Pérez de Guillén recounts the dispossession of most Californio landowners, like herself, to affirm their strong ties to their land. This is symbolized by her reemergence as “indescribably large brown insects of the land […]. [T]he Doña had turned into millions of insects […] (to) spread out and cover El Rincón de San Pascual” (Morales 13). These superhuman insects haunt the houses of the industrialists as manifest of the Mexican past (Kaup 161). Thus, Morales’ story engulfs the audience in a reading that, according to Antonio C. Márquez, is “more flexible, knowledgeable, open, and reciprocal with the author’s experimentation with narrative forms” (Márquez 77).

The Brick People is essential as part of a course in Literature, Social Studies, Chicanx/Latinx Studies, History, and other subjects, or to broaden society’s understanding of U.S. immigration and history. I bring attention to Alejandro Morales’ biographical/historical novel The Brick People, as a text that both, evidences that immigration is an experience that does not end at the border, and undertakes filling gaps in U.S. history with real and suppressed stories of immigrants that reflect the cultural divide in Southern California. The novel’s ending with the crumbling of Simons Brickyard empire parallel to Octavio Revueltas’ erecting, with his own hands, his humble home, not only reaffirms a humane system of values but, most relevantly, it incites an optimistic factual recovering and restoring of history, “brick by brick.”

Alejandro D. Morales, the son of Mexican immigrants, was born in Montebello, California in 1944. He earned his Ph.D. in Spanish from Rutgers University in New Jersey and is professor emeritus of Chicano/Latino Studies at the University of California, Irvine. Renowned author of Chicano literature, Morales is known as chronicler of the Chicano experience. He begins his literary career with Caras viejas y vino nuevo (1975), the first Chicano novel published in Mexico. He is recognized by many as pioneer of Chicano literature who writes in Spanish and English. His fictional narrative is rich with history and his historical narrative with fiction. Often, his characters are vilified by society, but live extraordinary lives and emerge from the fissures of Southern California history, ready to be rescued in Morales’ writing. The collection of his original manuscripts can be found in the libraries of Stanford University in California, where meaningful research is being done in the multiethnic literature of the United States. Morales received the 2007 Luis Leal Award for his many contributions to Chicano, Latino and U.S. literature. He lives in Santa Ana, California, where he continues to write novels, short stories, and poetry.

A homonymous documentary based on the novel was produced in 2012 by Art Kirsch, directed and edited by Mike Kirsch, with screenplay, script, and narration by Morales’ daughter, Alessandra Morales-Gunz. As expressed by Daniel A. Olivas, the documentary:

[P]resents an incredibly engrossing, well-crafted chronicle of the mostly Mexican-American community that sprung from the employment offered by the Simons brick factory. Through narration, old photographs and interviews of scholars and the brick people themselves, viewers will enjoy the honor of entering a world that no longer exists. Running at about one-half hour, The Brick People is perfect for the classroom and community events. (Olivas)

Márquez, Antonio C. “The Use and Abuse of History in Alejandro Morales’s The Brick People and The Rag Doll Plagues.” Alejandro Morales: Fiction Past, Present, Future Perfect. Bilingual Press, 1966, 76-85.