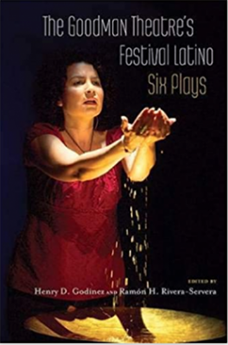 I teach an upper-division, undergraduate course titled, “Multicultural Theater and the Latinx Experience” in which students read plays by Latinas/os/x in the U.S. to broaden their understanding of the ever-evolving definition of multicultural theater. Together, we consider the political implications of the dramatic texts and their relationships to social activism. I employ an intersectional framework to our analyses and we examine representations of race, culture, class, gender and sexuality in these plays. My overarching goal with this course is to locate Latinas/os/x squarely within conversations about critical multiculturalism and U.S. theater history. I regularly include The Goodman Theatre’s Festival Latino: Six Plays, edited by Henry D. Godinez and Ramón H. Rivera-Servera (Northwestern University Press, 2013). Our Dad is in Atlantis, written in Spanish by Mexican playwright Javier Malpica and translated by US-based playwright Jorge Ignacio Cortiñas, is one of the plays in the Goodman anthology that stands out for my students and me. It is a simple, poetic, and gut-wrenching play.

Malpica presents the story of two young brothers who set out to find their father, crossing the border alone from México to the U.S. This play depicts the harsh reality of border crossing through the lens of a youthful relationship. It drives home the moral imperative to find different solutions to national borders as it illustrates the difficulties that one family faces. They become separated because of exorbitant health care costs, the death of their mother, and Dad’s lack of access to a job. Economic violence drives the choices that characters in the play make. First, Dad leaves to find work in the U.S. and then Big Brother and Little Brother leave to find Dad. Because the world is scary and uncertain: Grandma might hit you with her Bible and Dad has left them; they retreat into fantasy to soothe and care for one another. Through the misreading of a letter, Little Brother believes that Dad is in Atlantis, the mythical, underwater city, when he is actually in Atlanta. Both places merge in Little Brother’s mind and Atlanta becomes as mystical as Atlantis. Little Brother fixates on the Atlanta Braves baseball team and fantasizes that their best player is a Mexican hitter who has “broken all of the league’s records and those of the universe” (366). He believes he will play for the Braves when he gets to Atlanta. Fantasy fuels the brothers as they decide to take a bus from Hermosillo to the border town of Nogales. From there, they believe they will walk the rest of the way to Atlanta.

It is important to point out that this play, while it chronicles the devastating conditions that people face when crossing borders, also represents an artistic border-crossing made possible by the sustained efforts of Andrea Thome and the México/U.S. Playwright Exchange at the Lark Play Development Center. Through the Exchange, Latinas/os/x playwrights, producers, directors, translators, and dramaturgs share stories that illuminate personal and political struggles, celebrate family and community, and imagine new possibilities for Latinas/os/x. Playwright and producer Andrea Thome created the México/U.S. Playwright Exchange and has served as its director since 2006. She is a champion of Latina/o/x theater whose unwavering efforts have led to circulation of plays like Our Dad Is In Atlantis. It has now been produced in Washington D.C., Berkeley, Chicago, and various cities in Arizona, as well as in Monterrey, Nuevo León, and San Luis Potosí, México. I view the migration of Our Dad Is In Atlantis across the U.S. as an act of self-determination on the part of Latina/o/x theater artists like Thome and Jorge Ignacio Cortiñas, who is a significant, contemporary playwright and has worked as a translator with the Exchange twice.

Projects like the México/U.S. Playwright Exchange broaden the concept of Latinidad as movement and translation become embedded in the ever-expanding definition of Latina/o/x theater. Border crossings are inherent in the artistic process at the Exchange. The process begins with the pairing of bilingual, US-based Latina/o/x playwrights and Mexican playwrights. These pairs work on the first draft of the English translation. Next, the Lark hosts a ten-day residency where actors and directors join the playwrights. Each translation is read aloud at the beginning of the residency and then each company goes away to revise, refine, and rehearse the plays. At the end of the residency, the Lark produces public readings of each new translation. Because of this exchange, a wide range of plays with complex and compelling narratives traverse our nation in the face of specifically anti-Mexican sentiment and actions and more broadly anti-Latina/o/x policies and practices.

Our Dad Is In Atlantis functions as an indictment of state-sanctioned violence as the boys succumb to the harsh conditions of the desert as they try to walk from Nogales to Atlanta to find their dad. And yet the play circulates freely, much like the Monarch butterfly in Alarcón’s poem. This play calls on us to “open our doors and our hearts” to all people seeking refuge at our borders. It shines a light on the harsh reality that two boys endure and it asks us to advocate for ending the violence that our government deploys to create the conditions that lead to their demise. This play raises significant questions about representation and first-person narratives. How many images of families at the border have we seen on the news? Who frames the telling of these stories? More directly, how does mainstream media portray the struggles and the deaths of young children at our borders? There are thousands and thousands of stories of migration that deserve to be told with such care and contemplation as exemplified by Javier Malpica and Jorge Ignacio Cortiñas.