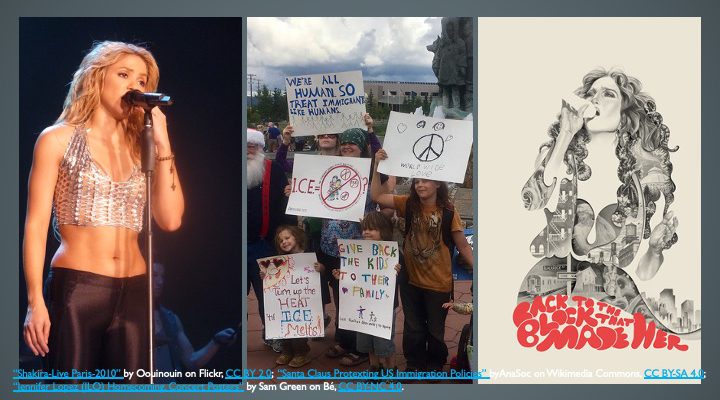 They pulled the wool over everyone’s eyes in order to make a statement about children, Puerto Rico, latinidad, beauty, music, the eclectic soul of Latinas who can dance merengue, salsa, pop, do the pole, and sing while exhibiting impeccable skill and demonstrating the richness of their particular latinidades. They proudly presented their athleticism to the rest of the world, proving that women in their 40s and 50s are not at the end of their lives, but instead joyfully engaging and embracing not only a stadium, or even one country, but an entire world, in the beauty of communication, in Spanish, through music and dance.

The working class vibe in J.Lo’s presentation reached us from the beginning: “I am still Jenny from the block,” and, “I have spent all of my life waiting for tonight.” She featured Swing Latino, a rising Afro-Latinx dance troupe which originated as a foundation for low-income youth in the city of Cali, Colombia in the late 90’s, opening a world of opportunity for them. The presentations were not only Latinx-centered, they were also queer: many of the outfits for the male dancers were feminized (for example, the black shorts they wore looked like skirts).

The singers asked the audience to interact and state their presence in both Spanish and English many times during the performance, including the question “En dónde está mi gente?” which got the crowds screaming, and calls to “Let’s get loud,” and “Ain’t nobody gotta tell you what you gotta do.” Spanish is no longer marginal, but central. Shakira and J.Lo masterfully showed the richness of diversity, and communicated with politicians and voters with very few words. This was not the first time that a stadium was used to establish a certain political statement: Colin Kaepernick and the Black Lives Matter movement already proved to the country that a political statement in a stadium is important for setting precedents nationally.

Shakira sang a couple of songs in Spanish, “Ojos así” that she composed early in her career and sang along with Bad Bunny “Chantaje” fully in Spanish. Prior to J.Lo’s and Shakira’s performance, only one other Spanish-language song had been featured in the history of Super Bowl half-time shows: “Oye” performed by Cuban-American Gloria Estefan in 1999. Shakira also foregrounded Spanish with her “Hola Miami!” greeting. She demonstrated  Berber joy with a zaghrouta, a trilling of the tongue used to express celebration in many North African and Middle Eastern cultures, underlining that her family comes from Lebanon, and showing us other ways of expressing delight.

Before the show, J.Lo wrote on social media, “Let’s show the world what two little Latin girls can do.” They surely did, as in the weeks following the LIV Super Bowl performance, theirs is the most-watched halftime show on YouTube with over 137 million views. However, national outcry has proven yet again that racism is alive and well in the U.S.A. Complaints against perceived public indecency have typically followed performances from women of color, attempting to detract from their messages of women’s empowerment, and highlighting the continued public policing of women’s bodies. Since the February 2 broadcast, over 1,300 complaints were filed to the Federal Communications Commission (FCC), because women’s sexuality is not “family friendly.” They have been accused of being: “too sexy;” “using children;” “making political statements,” as if they were the first to ever do this at the Super Bowl; ironically, “not knowing how to dance;” “being rich and not truly caring about the poor;” and more.

The dominant white patriarchal society highlights their sexuality and “indecency” to detract from the cultural pride and political power  harnessed by two Latina women on national TV.  J.Lo covered herself with the Puerto Rican flag, underlining that she is both Puerto Rican and American, at the same time. Their empowerment unsettles and delegitimizes the established “women’s place” in sports as “soccer moms” and cheerleaders (in equally revealing outfits).

From above, we watched as the stage was illuminated as an enormous women’s symbol, and female violinists accompanied multi-talented musician Shakira, who had guitar and drum solos. Afterwards, J.Lo wrote on social media, “All I want my girls, the little girls on stage with me and all over the world to know is how to use their voices and be proud of everything they are. We are proud to recognize that all of us together are what makes this beautiful country truly great.” It may have escaped some that this event was truly a protest on immigration, and that the young girls were the metaphor for the children in cages, at the US-Mexico border, awaiting to be rescued and returned to their families, but who got it?

Right-wing Christians absurdly complain that their “eternal souls” have been damaged by this performance, this specific language appeared in an article in Raw Story about a Christian activist’s legal proceedings. All this because a middle-aged J.Lo touches her crotch several times—as male performers frequently do—in control and empowered in her sexuality and expertise as a performer.  Her astounding athleticism as a female role model in her 50s is not highlighted by mainstream media, neither is her ability to creatively showcase her political, physical, spiritual and aesthetic  potential, empowering  a nation licking its intersectional wounds, through a half-time Super Bowl show.