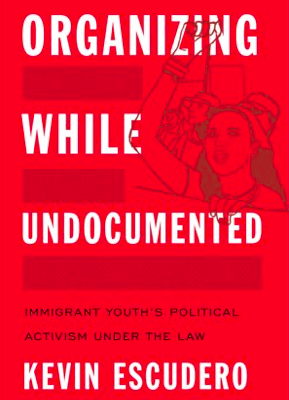 Kevin Escudero: I am an assistant professor of American Studies and Ethnic Studies at Brown University. I am also an affiliated faculty member at the Center for Latin American and Caribbean Studies, Sociology Department, and Population Studies Training Center. Born and raised in Southern California, my mom is a Vietnamese/Cambodian refugee and my father is a Bolivian immigrant. Given my own family’s experiences, issues of immigration were ones that I began contemplating at a young age. This early foundation helped shape the development of my own activist commitments later on in my life.

Kevin Escudero: Organizing While Undocumented focuses on the political activism of undocumented immigrant youth, specifically that of Asian undocumented, undocuqueer, and formerly undocumented individuals. In the process it answers the question of what role these activists’ multiple identities play in their ability to overcome legal and political barriers to participation in social movement activism. In the book, I make two primary arguments which may be of interest to the readers of Latinx Talk. First, rather than deterring individuals from taking part in social movement activism, I find that undocumented immigrant activists have courageously developed alternative strategies for overcoming legal and political barriers to organizing, namely the threat of deportation. Second, while it may seem that the multiplicity of identities that undocumented immigrant activists hold—racial/ethnic, gender, sexual orientation, etc.—would create challenges towards the development of a common identity, in Organizing While Undocumented, I find these identities can be understood as a strength rather than a weakness of the movement. More specifically, among the undocumented organizers I interviewed in San Francisco, Chicago, and New York City, I found that activists’ use of an intersectional identity facilitated their efforts to push the boundaries of their legal status by developing coalitions with members of other marginalized groups.

Kevin Escudero: I first learned about the experiences of undocumented young people while I was an undergraduate student at UCLA. During this time, in the mid to late 2000s, there was a great deal of activism taking place at UCLA and other university campuses. This activism, primarily led by undocumented students, was aimed at achieving two interrelated goals: (1) increasing support for undocumented students at college and university campuses and (2) supporting political efforts to develop a pathway to U.S. citizenship for undocumented individuals. The strength, and tenacity of my peers and my own family’s background inspired me to learn more about their struggle and ways that I could support these efforts. As a result, I joined various immigrant advocacy organizations where I learned about the specific demands that student activists were making at the university, state, and federal levels. Therefore, I see this book as a culmination of my efforts to combine my activist commitments and academic training in Ethnic Studies. In the process, I have sought to highlight the innovative strategies that members of the immigrant rights movement have developed while also centering activist narratives and voices in the work.

Kevin Escudero: As a digitally published, peer-reviewed platform Latinx Talk provides readers with timely and up to date information on pressing social issues facing Latinx communities. Examples of some of the topics covered in recent publications include the Central American migrant caravans and negotiating power and privilege in academia. I conducted research for Organizing While Undocumented from 2010-2014 and 2014-2019. The book covers an important set of shifts in the legal terrain affecting the rights of undocumented immigrants in the United States: the failed passage of the DREAM Act, President Obama’s enactment of the DACA Program, and the ending of the DACA Program. Nevertheless, given the rapidly shifting developments in the federal government’s treatment of immigrant communities in the U.S., I believe the readers of Latinx Talk might be interested in the ways that more recent discussions of immigrant issues covered on the site compare with the plight of undocumented immigrant communities during the time period covered by the book.

Latinx Talk: We have recently published on the state of Latinx Studies in the academy. How does your book relate to this topic?

Kevin Escudero: Organizing While Undocumented contributes to ongoing discussions in the field of Latinx Studies which have underscored the complex and nuanced aspects of a Latinx identity by emphasizing the importance of intersectional and interdisciplinary research approaches. Relatedly, given the fact that Latinx Studies and the broader fields of Ethnic Studies emerged from social movement struggle, this book underscores the continued importance of praxis, or connecting our scholarship to political action. Organizing While Undocumented raises questions as to the role that we can (and should) play as Latinx Studies scholars in the academy and the impact of our work both in the academy and as part of ongoing conversations in the public sphere. In my own experience, as a resident of Rhode Island, I have sought to learn more about the issues facing immigrant communities in the state, to leverage my role as a faculty member to support immigrant students at my institution, and to engage in research that will inform and support activist movements locally and nationally. I believe these commitments are ones that are at the very core of the work that many of us in Latinx Studies and Ethnic Studies do and I hope to contribute to these efforts through my own scholar activist work.