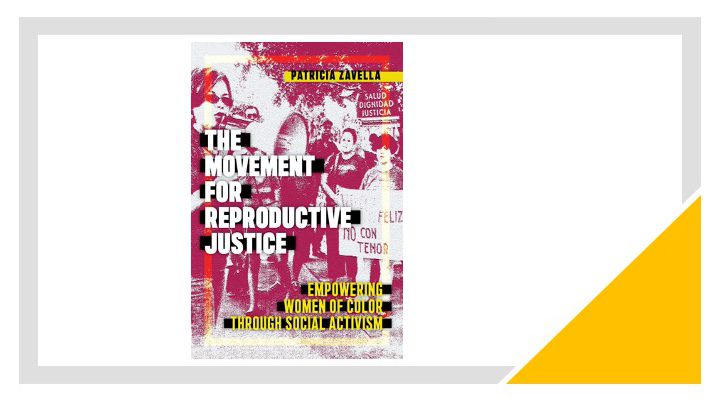 Latinx Talk: Please tell us about yourself and what prepared you for the work you accomplish in The Movement for Reproductive Justice: Empowering Women of Color through Social Activism?

PZ: I am a Chicana and have traced my Mexican and Native American family back to 1831 when southern Colorado was part of Mexico. I saw my relatives, especially my grandmother and mother, struggle with poverty, racism, and sexism, which inspired me to persevere despite structural barriers and I am first generation to attend college, beginning with community college. Trained as an anthropologist at UC Berkeley, my work is interdisciplinary and contributes to the fields of Chicanx, Latinx, Ethnic, and Feminist Studies. After 34 years at the University of California, Santa Cruz I am now a professor emerita.

I like to say that the movement for reproductive justice found me since I first heard about it through an email inviting me to attend a workshop led by a young Latinx woman and man in California’s Central Valley. I was intrigued by the reproductive justice approach that involved young men and gratified that these young people were actively trying to change conditions related to their well-being. I resolved to look into the reproductive justice movement and eventually my interests blossomed into a full-scale research project. I was drawn to researching this movement in part because the participants used an approach based in intersectionality, which I have used in my own writing and teaching. Also, when I was a graduate student with children, I experienced insensitivity and judgement, a form of reproductive oppression that this movement critiques as they advocate that we honor the struggles of young families. Finally, I was a member of the faculty-student research cluster, “Women of Color in Collaboration and Conflict” formed by Angela Davis at UCSC that problematized collaboration by women of color. All of these shaped how I approached this project that entailed five years of ethnographic research.

Latinx Talk: Would you please tell us about the contributions that your book makes that will be of interest to the readers of Latinx Talk?

PZ: In my book, I document how the reproductive justice movement uses a holistic framework that melds intersectionality and human rights. It also honors the strength and resiliency of people of color and draws on our ancestral knowledge and spiritual practices. Its mission is promoting women’s right to bear children free from coercion or abuse, to terminate their pregnancies without obstacles or judgment, and to raise their children in healthy environments as well as the right to bodily autonomy and gender self-identification. Advocates believe full that reproductive justice will only occur in communities free from state violence expressed through colonialism, neoliberalism, criminalization, or policies related to poverty, child welfare, the environment, immigration, education, or health that impede people’s human rights. They assert that access to healthcare is related to the ability to earn a living wage without placing your health at risk, afford healthy food, have access to parks and open space, and express our languages and spiritual and cultural traditions openly. Reproductive justice activists engage in grassroots organizing in communities of color using storytelling as a methodology. They strategically promote policy advocacy at the local, state, and federal levels. They also perform culture shift work that contests the symbolic violence of racist, classist, sexist, and heteronormative ideologies. Based in over thirty organizations across the United States (and one in Canada), this movement has been active since the 1990s.

PZ: Once I began the research, I was surprised that this movement receives very little national recognition and, at the time, there was little scholarship on it though a great deal has been published recently. As I conducted interviews, participant observation, and focus groups with activists and their constituents, I realized that I wanted to lift up their work. With its effective collaboration among like-minded groups working toward similar goals, I suggest that this movement offers a model for other social movements in four ways. First, this movement vernacularizes intersectionality through grassroots organizing with women in modest circumstances, ranging from adolescents to elders. Women engage in consciousness-raising where they learn to center themselves and find their own transformation, identities, and healing by becoming activists. Trainings provide an orientation toward thinking structurally and welcoming vulnerable people in their communities. Women mobilize power by learning skills—analysis, self-reflection, research, writing, public speaking, lobbying, organizing, facilitating meetings, questioning presenters—as well as gaining knowledge about a range of issues. Secondly, participants begin a process of working in solidarity on others’ behalf as well as for their own needs. Thus, intersectionality becomes generalized, with a simultaneous inward and outward gaze, and leads women toward collective social action with other movements. Participants in this movement endorse political philosophies that range from LGBTQ rights or environmental justice to immigrant rights or faith-based activism. Third, by using a human rights framework, reproductive justice activists invite scrutiny of conditions in the United States. This movement disrupts US exceptionalism, the debilitating notion that social problems mainly happen elsewhere. Reproductive justice organizations are enmeshed in transnational networks of activists who present their work in high-profile venues such as the United Nations, and they are in communication with activists from around the world. Fourth, the reproductive justice approach engages in decolonial thinking. These activists are expanding the notion that citizens should have access to quality care by advocating that everyone, including the undocumented, have access to health insurance, healthcare, and well-being. This movement takes on struggles for a living wage or adequate state resources for the poor, with the right to open space, parks, and toxin-free environments as well as full access to clean air and water and food security. This social movement offers multiple expressions of collective politicized identity by activists who advocate for empowerment for all.

Latinx Talk: What aspect of the Latinx Talk project does your book most align with?

PZ: My work especially resonates with your mission of providing a “space for Chicanx and Latinx Studies ideas, research, and creativity that may foster critical dialogues.” In the current era, national politics related to health are even more divisive, with efforts to dismantle the Affordable Care Act and low-income people of color in the United States are bearing the brunt of the COVID-19 pandemic. Simultaneously, we are witnessing the many ways in which people are pushing back, especially regarding police violence. We see robust critiques of how the pandemic is managed and insistence that everyone should be able to maintain their health and their life without state-sanctioned repression. A space for dialogues is critical as we work toward the well-being of everyone.

Latinx Talk: How is your book’s focus on coalition building among women of color in dialogue with current trends in Latinx and Ethnic Studies?

PZ: My work is in dialogue with the scholarship on social activism and peoples’ personal experiences as activists. Among those featured in Latinx Talk, the recent publication of an interview with Kevin Escudero on coalition building in immigrant organizing (5/19/20) focuses on the strengths entailed when incorporating an intersectionality approach by undocumented young organizers. Many of the women the reproductive justice movement works with are undocumented women, and some of the organizations have youth projects that include undocumented youth. I show how the RJ movement’s use of intersectionality pushes them to strategically look for those most vulnerable to policies or symbolic violence, including the undocumented, youth, and members of the LGBTQ community.

In addition, my analysis of the movement for reproductive justice provides a counterpoint to the work of Petra Rivera-Rideau, Omaris Z. Zamora, Sandy Plácido and Dixa Ramírez on “Afro-Latinx Feminisms” (11/28/17) who argue it is critical to recognize, remember, and give visibility to the ways that Afro-Latinx women experience, create, and theorize their own experiences. Reproductive justice advocates would completely agree with this view. However, historically, there has been a great deal of debate about whether Latinas should identify with feminism. Every reproductive justice organization with which I conducted staff interviews are women-centered and include women in their mission statements, and all of them question gender binaries and advocate for the rights of queer women. The tension related to identifying as a feminist as a woman of color has a long history, since feminism is associated with racial, class, and heterosexual privilege. None of the organizations I studied identify as feminist organizations, although many individuals working in reproductive justice organizations call themselves feminists. When I pointed this out, one RJ activist told me, “I consider myself a feminist but don’t claim that identity. It doesn’t make sense to place that label [feminist] on us, and ‘women of color’ captures our politics in a way that doesn’t negate any of our identities.” Reproductive justice activists use their own terms for racial-ethnic-national, gendered, sexual, and other identities as well as “women of color,” which reflects low-income racialized women’s political subjectivity. Simultaneously, various racial/ethnic groups are racialized in unique ways and have distinct experiences of racism and RJ activists emphasize that race is co-constitutive with gender, class, sexuality, ethnicity, age, embodiment, legal status, ability, religion, and other power relations in changing historical contexts that shape women’s everyday lives and their identities. I illustrate how reproductive justice activists practice a form of unnamed feminism in which they frame advocacy on behalf of women of color and strategically use tactics such as storytelling that centers on the experiences of women of color. It is critical that we honor the diverse identities and strategic political stances taken by people in our communities as we work collectively for social justice.

Patricia Zavella is Professor Emerita of Latin American and Latino Studies at the University of California, Santa Cruz.