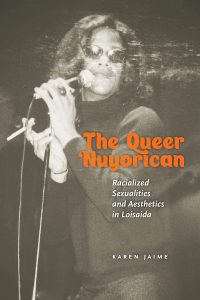 Karen Jaime’s The Queer Nuyorican begins with her own experience at the legendary Nuyorican Poets Café in New York City’s West Village.[1] Having served as a judge, competitor, and eventually host and curator, she brings a singular perspective to the study of Nuyorican performance poetry. The introduction is itself a must-read for anyone who wants a concise and accessible history of the Cafe space and the tensions that performers and curators have navigated. The Queer Nuyorican is a welcome addition to queer-of-color critique and performance studies more broadly, as Jaime’s text converses with Urayoán Noel’s In Visible Movement: Nuyorican Poetry from the Sixties to Slam (2014), Patricia Herrera’s Nuyorican Feminist Performance: From the Café to Hip-Hop Theater (2020) and Miguel Algarín and Bob Holman’s edited anthology Aloud: Voices from the Nuyorican Poets Cafe (1994). Jaime’s contribution provides much-needed analysis on the Nuyorican Poets Cafe in the twenty-first century, but more importantly, the book also reimagines the space and its history as a decidedly queer one. She writes, “Although not historically framed as such, the Cafe since its inception functioned as a space for artistic and sexual exploration, experimentation, and the challenging of identitarian fixity” (6). Beginning in the 1970s (with Miguel Piñero’s poetry) and ending in the mid-2010s (with Ellison Glenn/Black Cracker’s “Chasing Rainbows”), Jaime details a queer genealogy of the Nuyorican Cafe and the many artists that have graced its stage.

Jaime’s claim to a queer past, present, and future for the Cafe comes forth through the term, “nuyorican aesthetic,” which refuses the capital “N” of Nuyorican. Based in both Herrera’s scholarship and Jaime’s conception of the Nuyorican Cafe’s queer history, the “nuyorican aesthetic” (lower-case “n”) is “a queer artistic practice” that is “not contingent on ethnic affiliation or belonging, in order to challenge masculinist and heterosexist framings of the Cafe” (7, 6). She delineates the characteristics of this aesthetic, based in resistance—resistance to monolingualism, high/low art dichotomies, “politics of authenticity,” colonial oppression, and poverty. The “nuyorican aesthetic” is celebratory as well, reveling in “sensual embodiment, memory, and diasporic cultures” (8). Jaime imagines nuyorican as “a capacious aesthetic practice” rather than an ethnic identity marker, arguing that authenticity politics have often limited the content, form, and performance of poetry in the Cafe, posturing and appropriating the “rage of urban, working-class people of color without their presence on stage, or in the Cafe’s audience” (18).

The Queer Nuyorican’s chapters hold true to the principles she identifies as the “nuyorican aesthetic,” as she makes sure to return to its definition at the beginning of each chapter. Chapter One, “Walking Poetry in Loisada,” first discusses the geography and history of Loisada as an important part of the history of the Nuyorican Cafe’s founding. Jaime then focuses on Piñero’s walking and “queer poetic strut” inside and outside of the Café in the 1970s and 80s as part of its canon (36), paying attention to Piñero’s bisexuality and especially how it plays out in Short Eyes and Martin Wong’s visual art about their artistic and sexual relationship (42). Chapter Two, “This is the Remix: Regie Cabico’s Filipino Shuffle,” draws from the similarity of Puerto Rican and Filipino colonial history, laying out the anti-empire aspects of the nuyorican aesthetic (59). Jaime demonstrates how Cabico remixed work demonstrates the “interconnectivity between formerly colonized peoples living within the metropole [Manhattan]” (60).

Chapter Three, “Tens across the Board: The Glam Slam at the Nuyorican Poets Cafe,” is, for this reader, the most fascinating chapter of the book. Focused on the Glam Slam (playing off the “grand slam” poetry event at the Nuyorican Poets Cafe) that took place from 1998 to 2008, Jaime analyzes how two seemingly distinct cultures—the tradition of Harlem ball culture and spoken word/slam poetry—“queers poetry slam in terms of both performance practices and the highlighting of embodied queer sexualities” (90). The chapter provides the strongest evidence for the book’s thesis. The final chapter, “Black Cracker’s “Chasing Rainbows”: Hip-Hop Minstrelsy, Queer Futurity, and Trans Multiplicity,” examines the “racialized and queer trans aesthetics” of Ellison Glenn (who performs as Black Cracker). His performances pair “minstrelsy and Afrofuturity” to highlight the discordances of hip-hop and slam performance (124). Jaime relates Glenn’s transitory body, both as a trans man and as man who travels the world, to the “queer Black Atlantic” (125).[2] In addition to tracing the trans queer practices undergirding the “nuyorican aesthetic,” the chapters also trace the aesthetic and poetic changes that the Cafe’s stage has seen, from its beginnings as a place to workshop poems to more competitive modes like slam poetry and the hybrid slam/ball to hip-hop and the international music venues that Cafe poets like Black Cracker are playing.

As a reader, I was struck by how well Jaime maintained the throughline of her argument and the clarity and utility of her methodological approach, queer performance studies. Throughout each chapter, Jaime pays careful attention to the words and cadence of the text but also to the performative choices of each poet, indicating when the performer speaks louder, softer, faster, or slower as well as the choices of bodily and spatial movement. In addition to the analysis of poem’s lyrics and performance, Jaime also includes her own experiences (particularly in Chapter Three, in which she also analyzes her own Glam Slam victory), archival materials such as tapes from the public access program HomoVisiones, and interviews with Cafe performers, all of which provide for a rich reading experience. Overall, the book was compelling and has made me reflect on how I define and teach Nuyorican literature and poetry. Jaime’s attempt to consider Nuyorican poetry outside of the cultural nationalist influence of the post-MLK era of the early 70s is a meaningful intervention in the field. While I do think that the identitarian politics she seems to be refusing enter into some of Jaime’s analyses—based in queerness rather than ethno-race—this did not weaken the monograph’s argument. While I felt that the second half of the book—set more squarely in the 2000s—proved that there had been a strong shift to center queer poets and poetics more strongly than had been the case in the previous two decades, overall, Jaime successfully challenges the cis-heterosexual male image of the Nuyorican Poets Cafe that often permeates undergraduate and graduate readings of this tradition. By starting from the premise that queerness is not an incidental or marginal aspect of the Nuyorican Poets Cafe but rather a shaping force, she has made me excited to revisit and even re-evaluate older Nuyorican poets and to seek out what new and exciting work is coming out of the Cafe today.

Reviewer Bio: Regina Marie Mills is Assistant Professor of Latinx and US Multi-Ethnic Literature at Texas A&M University in the Department of English. She teaches courses on Latina/o/x literature, ethnic American life writing, and games and/as literature. Her book on AfroLatinx Life Writing in the twentieth and twenty-first centuries is under contract with the University of Texas Press. You can follow her on Twitter @guategamerphd.